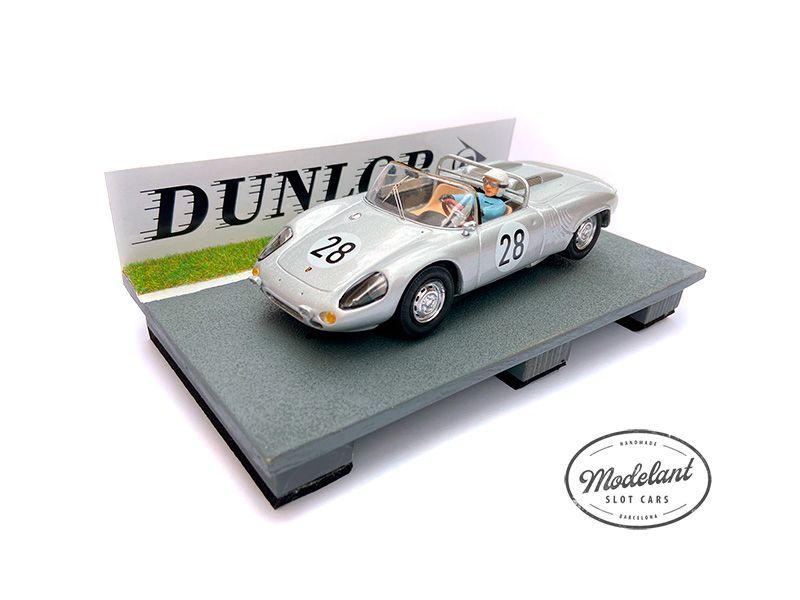 Porsche’s bad luck began before the race started. For the 1963 edition of the 24 Hours of Le Mans, the Automobile Club de l’Ouest eliminated the experimental class implemented the previous year and returned to prototypes with engines up to 4L. In this way, the improved Porsche 718 W-RS, which featured a 2-liter, 240 hp original Formula 1 engine and built for the recently dismissed P2.0 category, which they would have easily won, had to deal face to face with the almighty Ferraris, who got the first six final positions. All the cars qualified ahead of Porsche were much more powerful.

Edgar Barth and Herbert Linge were regular Porsche drivers. They knew each other very well as well as the 718, which allowed them to make an impeccable race strategy, flying in the cornering areas and regaining part of the time lost on the long straights due to its lack of power. Their engine needed less fuel, and they drove saving fuel, making fewer stops than their rivals, so that by the night stages they climbed to a sensational fifth place, despairing their incredulous rivals. – Where does that little silver car come from? – The minds of many wondered.

However, not everything was going to be fine. A few hours after sunrise, the rush in a pit stop made Edgar Barth hit the track with a loose wheel. Just before finishing the lap, the right rear wheel broke loose, forcing Barth to stop on a roadside. When everything pointed to an abandonment, Barth plucked his courage up and pushed the almost 700 kg of his three-wheeled Porsche for more than 500 meters until he reached his box exhausted, where after more than an hour and a half, and about 20 laps lost, the Porsche was able to return to the track and finish the race in a heroic 8th position that deserves to be remembered as much as the victory of Bandini and Scarfiotti.

In the late 1964, Edgar Barth was diagnosed with cancer and died 9 months later at the young age of 48. Years later, in 1977, his son Jürgen drove the Porsche 936/77 and achieved the victory at Le Mans together with Jacky Ickx and Hurley Haywood.

Herbert Linge’s life is still linked to Porsche: he was key in the development of the legendary 917, and he even shot scenes for the film 24h of Le Mans in 1971 with a camera on board of his 908, in which he made a good friendship with the actor Steve McQueen.

The 718 W-RS continued in the races and won numerous mountain hill climbs until 1964, when it was replaced by the 904.